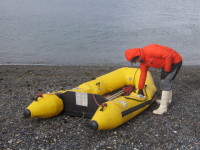 We have had an adventurous last few days in these cool parts aboard the Persimmon, a 40ft yacht built and skippered by Captain Ian of Aussie origin. We had a 3 day charter for very good rates east up the Beagle Channel. The northern side of the channel is Argentina and the southern side is Chile and unfortunately with limited time we could only stay in Argentina. Despite that we had a great trip.

The morning was calm and we cruised into the main channel suprised at the lack of wind given the amount of swell. Well the reason for the swell made itself known in very short time – the building 20 knots increased to 40knots in a very short time and luckily we only  had the small genoa sail up when it hit. Things were edgy with the auto pilot throwing a wobbly and Alan enjoyed the challenge of keeping us on a straight course till things settled. It was Ians fastest trip up the channel to a safe mooring just past the original  Haberton Estancia (farm) of Terra del Fuego, cruising at 9 knots.

The other unusual thing was the number of whale spouts and  whales (when they were close enuf) we saw in the channel. Ian has not seen such a density of them in the Beagle so we were lucky.

The next day we visited the Magellanic penguin colony which is on the Haberton private land and unfortunately we were there when a boat from Haberton was there. Alan and I took the rubber ducky and checked out the colony on foot and it was not enough for an indirect telling off from the Haberton staff, they partially deflated our dingy and pulled the bung before making a speedie departure as we returned to our flotation device. Luckily we noticed the bung (before we launched) as momentarily we wondered if it was the penguins that had put a hole in the sides but it was soon obvious that there was sabotage going on. They could have been more upfront about it and just asked us for $$ but no. Luckily we could get back to the yacht without getting too wet.

The highlight of the trip back was close encounters with 2 whales. Very cool!

So all in all a wee treat after all our cycling. Tomorrow we fly to Buenos Aries and 30 degrees . 2 months of leg hairs was removed this morning (for a very good rate) so we look forward to warmer temps and short skirts. It has been a very cold end to our trip with much new snow over the last few days and we were lucky to finish cycling before this last cold snap. 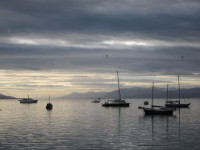 ..things picked up to 40 knots and blew the auto pilot for a while 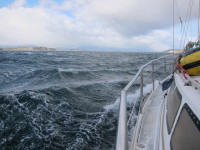 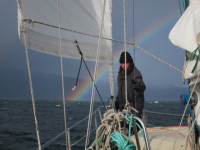 Rainbow in the rigging 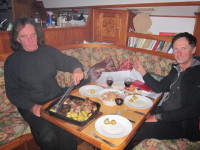 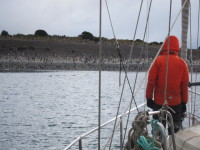 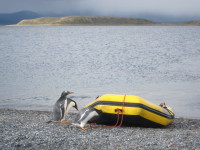 Gentoos around the rubber ducky 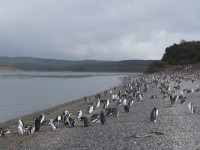 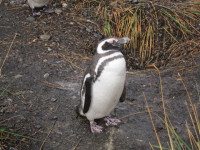 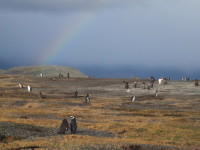 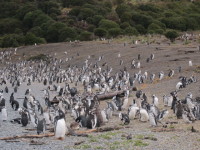 Would love to have stayed for longer 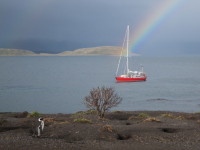 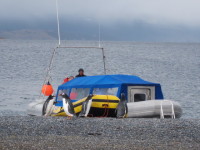 the sabatours – in the boat 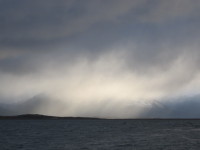 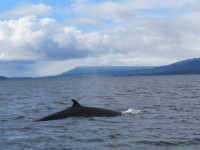 Never get sick of this sight 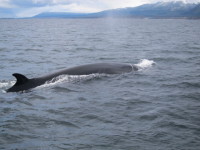 Sails up in the Beagle channel

Arriving back in Ushuaia 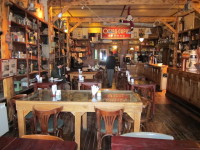 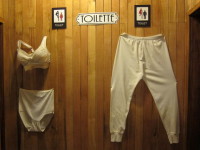