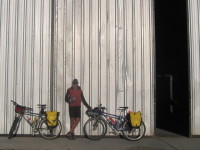 We left El Califate with the wind behind and cruised 40km eastwards alongside Lago Viedma and then heading south. The road suprised us with a gradual wind assisted 600m climb onto a high plateau that extended forever. Up there we had our first taste of the strong Patagonian side winds. Alan following me could appreciate the angle I was leaning my bike into in order to stay ´upright’. Our stop for the night was a workers camp that kindly accommodate cyclists in their shed and provide the necessary water (which is the main thing lacking up on the pampas). The large shed was howling with the wind and by the end of the day we had company of 3 other cyclists including our Venezualan friend Juan.

Overnight the wind died, and we left early for the 70 km of ripio shortcutting to the next paved highway. We thought we had experienced the full range of ripio but this was a hard, uncomfortable endless ripio that deteriorated. My carrier is still held together with string and wire and survived the onslaught. We had a downhill advantage and luckily the wind didn’t pick up till we reached the paved road and small gas station. 12 more km of riding was enuf for my rear end (esp as the head wind was picking up) and so we stopped by the only water around.

We were riding next morn by 7am and the sunny dawn was replaced by a windy wet morn – cold too as we were still up at 500m or so. We crossed back into Chile and descended from the high pampas and saw trees and mountain relief again. It was a battle most of the way to Puerto Natales, which we reached late in the day – slow due to wind and stops for immigration formalities and food. Time for a rest after 3 challenging days. 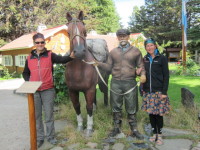 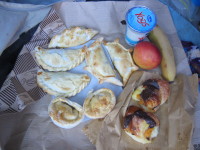 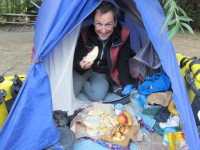 ..and pretty pleased with his efforts! 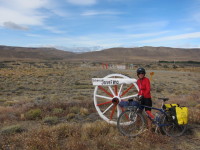 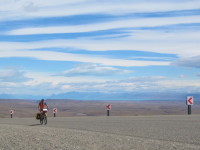 Nearing the end of the huuge wind assisted climb, Lago Viedma in background 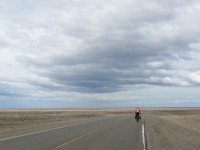 The trong crosswinds up here kept the riding interesting 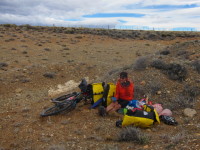 A break on the side of the road 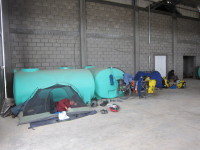 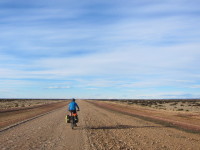 the long and not winding road – tra le tra la 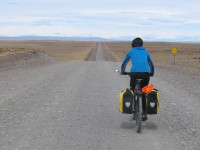 giving the boys a head start 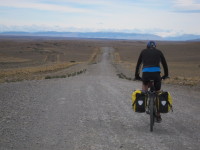 Finally descending off the high pampas 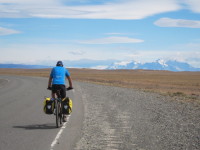 The Torres del Paine massive in the distance 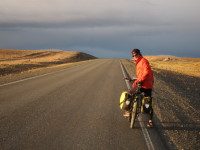 7am light – before it started blowing and raining 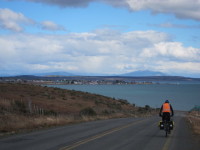 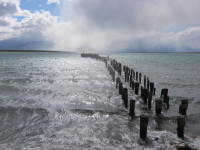